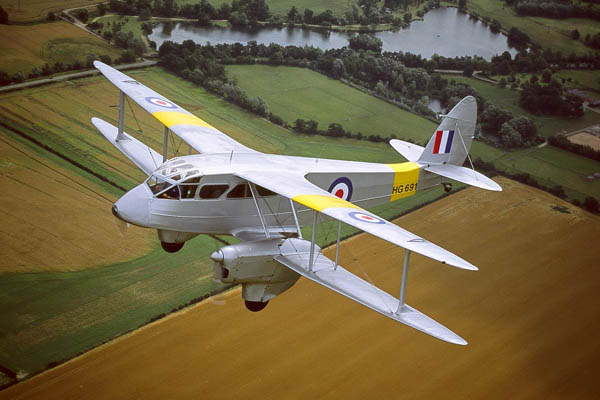 Your personal London tour guide will pick you up at 9 am from your London hotel and take you to the Imperial War Museum Duxford.

At the start of the Second World War, Duxford was a Royal Air Force fighter base, its squadrons equipped with Spitfires and Hurricanes. The control tower and two of the hangars are original.

Take a nostalgic sightseeing flight in the Dragon Rapide, one of the best loved pre-war aircraft. Explore by air some of the numerous USAAF bomber bases in East Anglia on board a De Havilland Dragon Rapides. This is a really elegant twin-engined airliner from the 1930s. The pilot controls the aircraft from the tapering nose and you seat behind him. As well as the fascinating sites of historical importance, it is an amazing flying experience. The view from the plane is excellent.

The flight lasts about 40 minutes with 30 minutes airborne going from Duxford over the ex-WWII airbases of Nuthampstead, Fowlmere, Bassingbourne, Debden, Little Walden, Madingley and back at Duxford.

Madingley is also the location of the US war memorial and the aircraft would also fly over Cambridge itself.

After your flight visit the Imperial War Museum at Duxford. Today the fascinating collection concentrates on British and American military aircraft from both world wars. Alongside the fighters and bombers are a few civil aircraft. Even at weekends the hangars are hives of activity as aircraft are stripped down, reconstructed and restored in many cases to flying condition.

Contact us too about combining your visit to this historic WW2 airfield with a once-in-a-lifetime flight in the iconic Spitfire. Follow in the footsteps of Churchill's "the Few" - the heroes who took to the skies to defend Britain from the Luftwaffe. Experience the sights, sounds and thrill of this awesome aircraft up close.

You could extend this tour to include Cambridge or the Cambridge American Cemetery and Memorial.

This was our third trip and tour with British Tours. Castle tour in England, London day tour (customized); Paris and Normandy, and then Rome. All private tours. All were excellent, with professional service by knowledgeable and personable guides. We were especially impressed with the Rome trip that included a private tour and viewing of the Popes changing rooms.