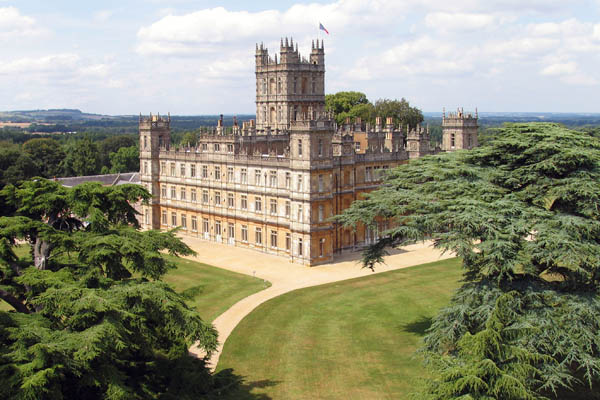 Drive through Oxfordshire to the picturesque village used in the TV series. Although set in Yorkshire, Downton Abbey's exterior scenes were filmed in a perfectly preserved village of Oxfordshire, one of England's oldest villages which traces back to the Iron Age.

Visit the church, where four of the weddings took place including Lady Mary to Matthew Crawley and later to Henry.

Also visit the location used for the facade of the cottage hospital in the series, and take photos outside Isobel Crawley's house and the village green where so many scenes were played out. See other village locations recognisable from the film, including where Lord and Lady Grantham have tea at Mrs Patmore’s ‘guest house of ill-repute’.

Not far way, you can enjoy a lunch or refreshment in the pub where Lady Sybil eloped with her chauffeur, Branson.

The highlight must be a visit to Highclere Castle which served as the Crawley’s home. The magnificent mansion was remodeled in the 19th century into its Elizabethan style and will transport you back in time, right into the heart of Downton Abbey. You will see the castle's salon, library, dining room and entrance hall and staircase which all feature so prominently in the series as the setting for the Crawley’s family home.

If you love Downton Abbey as we do, this is simply the best tour ever!

Please note that tickets for Highclere Castle sell out at an alarming rate and so if you are interested in this tour, it is essential to book fast!

More scenes were filmed elsewhere and especially in London, where Rosamund had a town house, where the family were often visitors. If you are interested in adding the London locations to your tour, please enquire.

Please note that there is limited availability for this tour. If possible, please give us a choice of dates when you can travel.

This is the second time in a year that we have utilized British Tours. We could not be more satisfied with the experience we’ve had both times. British Tours always does an excellent job. However, what made these tours extra special and outstanding for us was our tour guide Tom