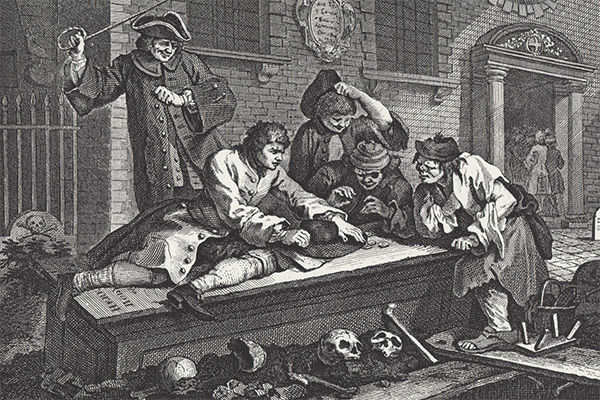 Visit a ruined monastery haunted by women including the She-wolf of France, and the oldest hospital in London where the circulation of the blood was discovered. Walk through the site of a 14th Century plague pit where allegedly not everybody buried there was actually dead and on through the bloodiest area in London, site of executions and even the burning at the stake of the only woman to have been tortured at the Tower of London. The place may look more familiar to those who remember the Richard Curtis film Four Weddings and a Funeral. Hear about the exploits of the body-snatchers and the grave robbers. Also the site of the notorious Newgate Prison and tales of some of the prisoners who still reappear in one guise or another to this day. If you are feeling thirsty, we can finish in a typical Victorian gin palace where you may very well encounter even more mysterious happenings including “Fred” the poltergeist who allegedly can be found in the cellar if you are brave enough to go down there!

This is a two hour private walk. Possible entrance to St Bartholomew the Great (small donation)

This is the second time in a year that we have utilized British Tours. We could not be more satisfied with the experience we’ve had both times. British Tours always does an excellent job. However, what made these tours extra special and outstanding for us was our tour guide Tom