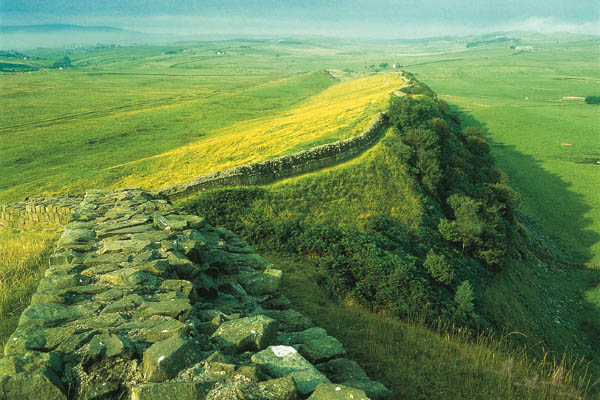 The highlight of this tour is Edinburgh, widely regarded as one of Europe's most handsome cities, and the scenic peaceful part of Scotland to the South that so inspired Robert Burns and Sir Walter Scott, which for centuries was in the midst of turbulent border warfare and bears the scars in the once magnificent abbeys at Jedburgh, Melrose, Kelso & Dryburgh, still awe-inspiring in their ruined state.

Your route takes you via Elizabethan Burghley House and either the ancient university city of Cambridge, the historic town of Stamford, or the magnificent Stately Home Chatsworth. Continue to York for your first two nights. Take a walk along the ancient city walls offering beautiful views, see the fine Minster - the largest Gothic Cathedral in England - with exquisite stained glass windows and the "Shambles", a perfectly preserved street of Medieval half-timbered houses.

On your way North cross Hadrian's Wall, built by the Romans circa 120 AD and the romantic ruins of Jedburgh and Melrose Abbey where the heart of Robert the Bruce is buried. On your way to Edinburgh choose to visit Sir Walter Scott's home, Abbotsford House, Kelso a market town which he described as "the most beautiful in Scotland", or Floors Castle, Scotland's largest inhabited castle owned by the Duke of Roxburghe.

You will have two nights in Edinburgh to enjoy this elegant, stimulating city. See its museums and galleries, Edinburgh Castle, the Palace of Holyroodhouse, the Royal Mile, Princes Street.

On your fourth day choose Hopetoun House, one of Scotland's finest Stately Homes; or ruined Linlithgow Palace - birthplace of Mary Queen of Scots and drive through Robert Burns country via Gretna Green where under-age eloping lovers could be married without their parents' consent before entering the Lake District to stay the night. The Lake District is a region of majestic mountain scenery, lakes and lush valleys dotted with sheep: visit Wordsworth's Cottage or Elizabethan Levens Hall.

Your return to London will take you through Stratford-upon-Avon immortalised by Shakespeare, or the Cotswolds and Oxford, England's oldest university dating back to the 11th century. Your private tour guide will be able to advise you on the best combinations and any alternative sights.

Thank you for the flexibility you and Rod offered us on our Airbase tour. We spent a wonderful day in North Pickenham learning about the lives of those pilots - my dad included - during the war. Rod was the perfect guide for us - he has a vast and voracious knowledge about the military experience