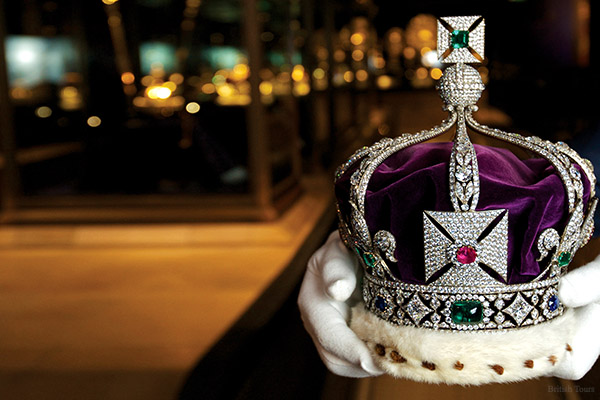 Crown Jewels Morning Tour, 3 hours
There is nothing quite like being in the Tower of London when its drawbridge is closed to all but you and the people who live there. Add to that a private viewing of the Crown Jewels and you have an incredibly special, unforgettable experience.

Arriving at this 900 year old fortress, you will be greeted by a Yeoman Warder (often known as a Beefeater) and walked via Traitors Gate, where prisoners entered and awaited their fate, and the execution site where no less than three Queens of England were executed. Then on to the Jewel House, which houses the uninsurable, priceless Crown Jewels!

From here the Duty Warden will welcome you and then you will be guided through the exhibition to the piece de resistance, the stunning jewels. This dazzling display includes the St Edward’s Crown, that has adorned every crowned Monarch’s head since 1661; the Monarch’s sceptre holding the largest clear cut diamond in the world at 530 carats. And the Imperial State Crown that Her Majesty described as her best hat!

You are welcome to stay in the Tower at your leisure after it opens to the public.

Crown Jewels, Evening Tour 3 hours
If you are looking for the ultimate exclusive evening experience in London, then you’ve found it! Entering the Tower of London once it has closed its doors for the night is truly incredible. Arriving at the Tower, you will be greeted by a Yeoman Warder, a guardian of the fortress. You are led through the grounds of the Tower, that has imprisoned some of the most famous people in our history, including three Queens of England who ultimately met their untimely death here. You pass the Bloody Tower; Traitors Gate, where prisoners entered by barge to await their fate and the central keep (pictured), constructed in the 11th Century, by William the Conqueror on your way to the Jewel House. Here in the Hall of Monarchs, you can enjoy the display of all of our Monarchs from 1066 to present day whilst being served with prosecco and canapes.

After the reception, you are led through the impossibly secure vault doors to view a mesmerizing display of sensational jewels. Marvel at the 530 carat diamond adorning the Monarch’s sceptre, see the stunning all diamond crown worn by Queen Victoria, anything but diamonds gave her a headache and the Queen’s ‘Best Hat’, containing a staggering 3000 jewels!

After the private viewing, you will be escorted back through the Tower by a Yeoman Warder.