Naval Portsmouth and a Taste of the South Coast 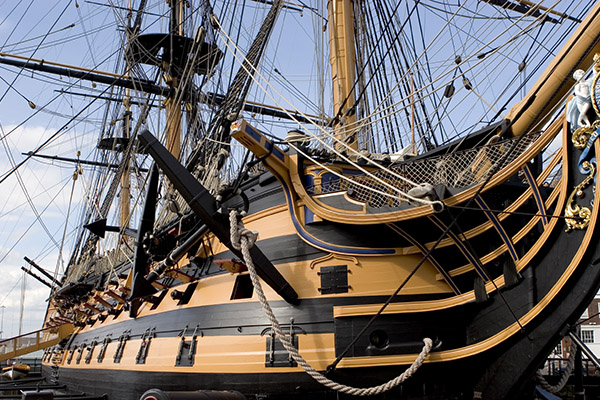 10 hours Famous Naval Portsmouth, and a taste of the South Coast

One hour 40 minutes by train from London brings you to Britain’s premier naval city, home of the Royal Navy- steeped in history, but with a super seaside atmosphere for coastal walks and views across the Solent to the Isle of Wight.

Your local guide will meet you either in London or at the Portsmouth Harbour train station. There is a wealth of Britain’s naval history to learn about and explore- the Historic Dockyard with Henry VIII’s Tudor Mary Rose warship, Admiral Lord Nelson’s Victory from Trafalgar 1805, and HMS Warrior, one of the first iron-clad transatlantic steamships.

On a 45 minute Harbour Tour you will also see current navy ships, perhaps including the latest aircraft carriers. After a touch of shopping or restaurant refreshments at Gunwharf Quays watching yachts in the marina a twenty minute stroll along the seawall brings us to Southsea.

Learn about Portsmouth in WW2 - and perhaps visit the D-Day 1944 Museum, and see the Naval Memorial where the Queen has regularly hosted veterans and world leaders for historic commemorations. Portsmouth also has associations with Charles Dickens. You can visit the modest house were Dickens' was born in 1812.  The small terraced house has been restored and furnished in the Regency style of the time. His father worked at the dockyards in Queen Street.

All the while gaze out at the Solent with its many boats plying back and forth to the Isle of Wight or even France. Portsmouth is a great city with variety for all ages. Most of it is easy walking distance - or to get to Southsea a short taxi can help.