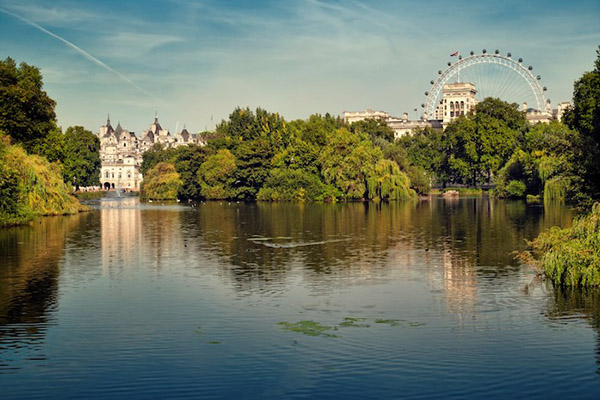 Enjoy a lovely stroll through the central Royal Parks, whilst learning about the Royal lifestyle and why the Londoners call these parks “The Lungs of London.”

Your walk begins in the heart of London’s Political and Royal centre, where we uncover the struggles between politics and royalty over the centuries.

Leaving politics behind, we cross the smallest, but arguably prettiest of London’s parks, complete with a lake and views of the Queen’s residence, Buckingham Palace and its own rare bird collection. Adjacent to this stunning park, once a hunting ground for a very famous King or two, we find the Royal residences of The Mall, including that of the longest ever heir in waiting, Prince Charles.

Next onto Green Park, so named as flowers do not grow there, but why don’t they? Admire the fine trees as you wander up past Buckingham Palace.

Now in the largest of London central Royal Parks, Hyde Park, perhaps a good time for a quick cup of tea on the shores of the lovely lake. As you wander through this beautifully manicured park, it is hard to imagine that once upon a time, you would have been in fear of highwaymen holding up your carriage. Pass famous Speakers' Corner and hear of its origins, close to where the gallows once stood.

In our final park, we see wonderful views of the Albert Hall and admire the stunning memorial to Victoria’s beloved husband. Our final stop on the tour is Kensington Palace, the former home of the Princess Diana and now the home of her eldest son, Prince William and his family.

This is a fantastic tour of beautiful parks and mesmerising history with a lot of Royal gossip thrown into the mix.